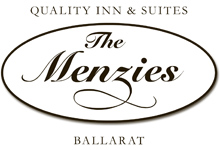 Situated on historic Bakery Hill,  The Menzies’ location oozes a rich history. Of great  historical significance, The Menzies is situated only metres between two well documented events. To the left of the motel was the discovery of *The Welcome Nugget and to the right, where the Eureka Flag flies at the Bakery Hill Roundabout – is the location where miners assembled to hear the famous speech by activist Peter Lalor prior to the **Eureka Rebellion.

GOLD!  *The Welcome Nugget was unearthed near the corner of Humffray and Mair Streets on 9 June 1858.  At the time it was the largest lump of gold found in the world. In ‘old speak’ it was 20 inches long, 12 inches wide, 8 inches thick,  weighed 2217 troy ounces (69 kg) and was 99.6 pure gold. The enormity of it was truly astounding. A replica can be seen in the Ballarat Gold Museum opposite Sovereign Hill.

EUREKA! On Wednesday, 29th November, 1854 about 1500 angry gold miners gathered at Bakery Hill  to protest over high licence fees – subsequently leading to the **Eureka Rebellion – an event that has often been identified as the birth of democracy in Australia. The motel opened in the year 2000 and was named after Robert Gordon Menzies, Australia’s longest serving  Prime Minister. The Menzies Motel is built on the grounds of Public School No.34, the school he attended from 1906 – 1907. The impressive school building still stands today and is currently a commercial Antiques outlet. “Loved everything about it.We felt very much at home with the room and the decor. Really upmarket.We decide to stay a second night.”
Deborah September 2013